What More Could You Ask For? A Story of Lasting Love

Capital Health Hospice is pleased to have cared for Amy Reed (11/14/1936 – 9/8/2020). During February, a season for celebrating love, we invited her husband, Barry Reed, to share his remembrances of his Valentine, to honor her memory and their life together. 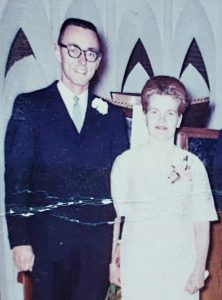 On a brisk December day in 1964, Barry and Amy Reed were pronounced man and wife only 10 short weeks after they said their first hellos. They were both students at the time but also worked together at Mound Laboratory in Miamisburg, where they struck up a friendship that would lead to a lifetime of love.

When asked for three words to describe his spouse, Mr. Reed thought for a moment and offered the admirable traits of “loving, loyal, and talented.” As he shared more, it became clear that these were the right descriptors of Amy, even in her youth.

Barry proudly imparted that his wife graduated at the top of her high school class, and even as a single mother of three at the time of their marriage, was pursuing a college degree. She eventually attained a B.S. in biology from the University of Dayton and a master’s degree in math education from Wright State University. Upon graduating from UD in 1966, she started her 33-year teaching career, all but one of those years as a math teacher in the West Carrollton school system.

Such academic achievements do not come without support and hard work, and this they certainly did, as she provided support to him while he too achieved his education and consequently held his long-time career in Human Resources. 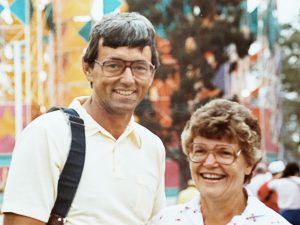 Barry and Amy were spectators at the 1984 Olympics in Los Angeles, CA.

Amy and Barry enjoyed life to the fullest, with interests in numerous hobbies between them. Growing up on a farm, Amy continued her love of planting and tending to her annual garden, which was always successful, thanks to her inherited green thumb. Barry pitched in by doing the tilling and weeding…. true love, to be sure! Maybe he didn’t know what he was getting into when in the first year, the plot was only 4’ x 2’, and over the years, he eventually found himself tilling up a 10’ x 40’ patch of land! With a smile, he recalled that every winter her days were brightened when she received the seed catalogs and started planning for the spring. They knew it would be hard work, but they enjoyed the time and making memories together. 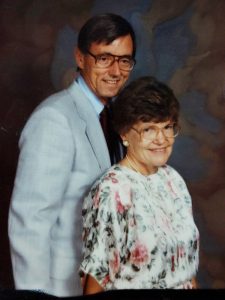 With his whole heart, Barry supported his wife as she pursued many interests. She was a voracious reader, excellent seamstress, great cook, budding pianist, a bowler who held her own, and solver of brain-teaser puzzles that tripped up your average Joe. Not only did her loving husband encourage those efforts, but also she reciprocated the support. Knowing his love for softball and seeing his desire to impart wisdom to younger generations, she volunteered him to coach the West Carrollton High School softball team. She was right to do so, as Barry went on to coach the high school team for 15 years, as well as the University of Dayton team for 22 years. He even ended up teaching business classes there as an adjunct professor.

Especially in retirement, they remained vibrant through their travels. They crossed the United States on several occasions and visited Spain, Morocco, England, Scotland, New Zealand, and Australia.

Over so many travels, the couple developed many fond memories. One he recalled was an overseas trip when the luggage did not arrive. They found themselves in a foreign country, shopping in foreign stores, for foreign items with unfamiliar names…. like “bloomers,” for example. 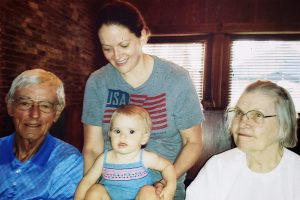 It is always joyous to celebrate love, which is why it is important to pause and be inspired by a 55 year-long relationship. These two people created and shared such a remarkable life and left a legacy of love to their 3 children, 5 grandchildren, and 6 great-grandchildren. Such love makes the world a better place.

In a tender voice, Mr. Reed paid a loving tribute: “Everyone should, at least once in their life, have a daughter, sister, mother, favorite cousin, lover, teacher, neighbor, friend, travel companion and/or spouse like Amy. To do so is to truly be blessed. She is everything you could want in a life companion.” 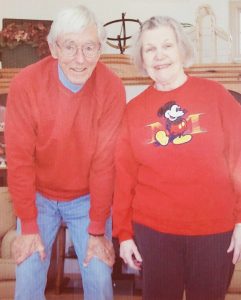 Of his late bride, and what advice he would give to others from what they learned of life and love, Mr. Reed said that he hopes others live as they did…. with no regrets. They worked hard and had much to be proud of. Barry and Amy Reed lived every day to the fullest, loving greatly and giving generously. He concluded the interview with a heartfelt question: “What more could you ask for?” Indeed, what more can anyone ask for?